President Obama Does Something Right (Finally)

Today, President Obama introduced something that I believe is the beginning of a good bipartisan effort to reduce American dependence on foreign oil. While I have not yet had an opportunity to read through his entire plan, my remarks here are based on what his comments at Georgetown today.

The plan rightly declares that our dependence on foreign oil is a dangerous one. The chart below shows that when the percentage of Persian Gulf oil as a share of America’s total crude oil imports reaches a peak, the United States tends to engage in a Middle Eastern conflict at that peak or several years after it. The good news is that the trend in the share of Persian Gulf oil in American imports is declining. The bad news is that it still tends to creep back up until the United States engages in another Middle Eastern conflict to protect America’s vital interests. 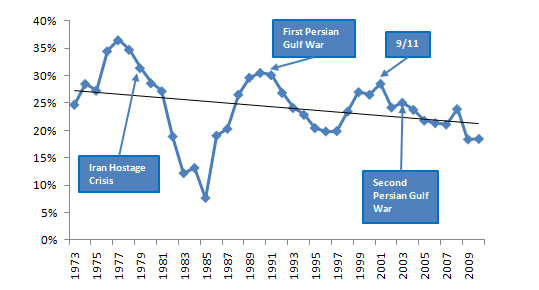 “The United States of America cannot afford to bet our long-term prosperity, our long-term security on a resource that will eventually run out, and even before it runs out will get more and more expensive to extract from the ground.  We can’t afford it when the costs to our economy, our country, and our planet are so high.  Not when your generation needs us to get this right.  It’s time to do what we can to secure our energy future.”

I could not agree with the President more on this issue. We are now locked in a situation, in which whenever the global economy begins to heat up, oil prices spike and thereby help push the economy back into a recession or at least slow it down. The planet already saw one round of this phenomenon in 2008, and may see a second round in 2011.

While modest, the goal to cut American foreign oil imports by 1/3 in a little more than a decade from now, is better than doing nothing. More importantly, it seems to be bipartisan and rational. The plan rightly aims to achieve the 1/3 reduction through: 1) more domestic oil exploration and production, and 2) reducing overall fossil fuel dependence via clean energy substitutes and improved efficiency.

On this front, the President is righly working to expedite new drilling permits and pushing the oil industry to drill on land it has already leased. President Obama is even open to development in Alaska and the Mid- and South-Atlantic states. He even suggested further development of American natural gas resources.

For the left, the President touts efforts to replace oil with advanced biofuels. I agree in principle with this step, but I think having the government choosing individual companies is a bad way to accomplish it. He also tous investments in mass transit and high-speed rail. I do not have a strong opinion on these two areas so long as the government finds a way to run these two systems profitably (which I doubt it can).

The President also rightly used his leverage as an equity owner of General Motors last year to get American automakers to agree on increased fuel efficiency standards. Right now, the foreign competition is crushing American automotive companies on this front because the countries in which they operate have more stringent standards.

The later parts of President Obama’s speech focus on a broader clean energy policy. He even reaffirms his commitment to nuclear!

I don’t agree with everything in his policy, but I think it may serve as a good model for a national bipartisan energy policy going forward.

Of course, the devil is in the details, but this policy seems to be a good start.

12 Responses to President Obama Does Something Right (Finally)