Several months ago, I published the following chart to describe my theory on the underlying causes of instability. 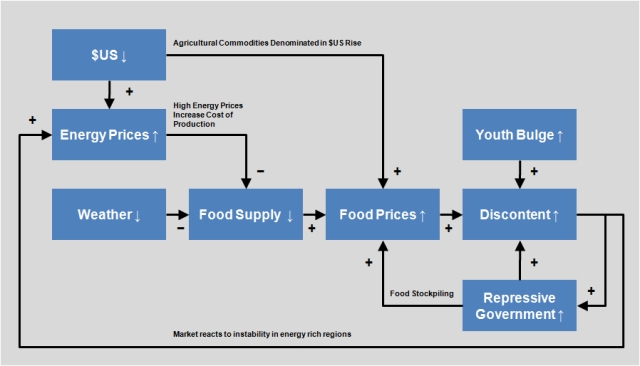 Source: Reflections of a Rational Republican ©2011

I confidently asserted that instability is “a positive feedback loop driven by weather, energy and food prices, currency fluctuations, repression, and demography.” At the time, I provided no empirical evidence in support of this view.

However, this week’s Economist supplies evidence of what I always believed was the most speculative leg of my theory. That is, that weather and/or climate can be a key contributor to instability.

Columbia University professor Solomon Hsiang analyzed data on both weather and civil unrest in 93 countries where weather is influenced by a once or twice per decade weather pattern known as El Niño vs. 82 unaffected countries.

Furthermore, these conflicts occur disproportionately in affected countries in the second half of the year. This makes sense because one would expect the lack of rain from El Niño in the early part of the year to affect crop yields in the latter half.

A more sobering implication of the study might be that humans adapt to climate by slaughtering one another.

2 Responses to Conflict Correlated with Climate