Iran: Another Domino Teeters; America Should Shove It Over the Edge 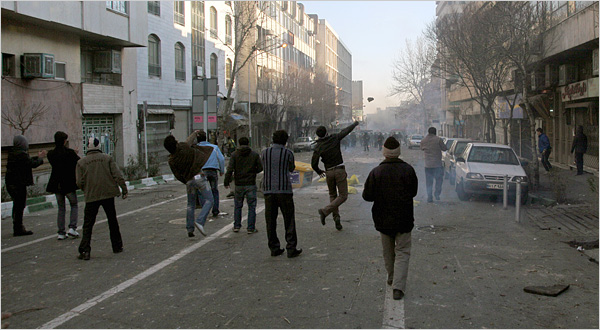 On the heels of my recent article on food prices and Middle Eastern stability, events in Iran are coming to a head. Riot police today physically beat protestors in major Iranian cities. The New York Times estimates that 20,000-30,000 demonstrators took to the streets today in solidarity with the uprisings in Egypt and Tunisia.

This instability is no surprise. Iran has all the classic symptoms of a country with a major demographic imbalance. According to the CIA, half of Iran’s population of nearly 77 million is under the age of 26, GDP per capita is $11,200 per year, unemployment is nearly 15%, and 18% of the population lives below the poverty line.

One could say that Iran is almost Egypt’s Persian clone. 52.3% of Egypt’s 84.6 million-person population is under 25, unemployment is at nearly 10%, and 20% of the population lives below the poverty line. The only key difference is that Egypt’s GDP per capita at $5,900 is slightly more than half that of Iran.

One other key difference is also worth noting: 68% of Iranians live in urban areas, while 43% of Egyptians do.

I have a theory that unrest in highly urbanized countries can turn ugly a lot faster and has greater impact on the whole of the country than it does in predominantly rural countries. As such, I think it makes sense that the Iranian unrest turned violent sooner. I also think it will spread faster than it did in Egypt.

The flip side of my urban/rural population theory is that urban revolts are much easier to put down than rural revolts. My view comes from simple intuition and military experience: Targets are easier to defeat when they are concentrated.

Americans know this from historical experience. The surge worked in Iraq precisely because the United States added more troops in a country that was 67% urbanized. It is proving much more difficult in Afghanistan because only 24% of the population there is urbanized, and those who live in rural areas occupy very rugged and inaccessible terrain. Vietnam was a difficult experience for similar reasons.

The bottom line is that this revolt will only benefit the Iranian people if the government allows it to. The only reason the 1979 revolution succeeded is because the Shah panicked and fled the country.

That said, the United States should still take every opportunity to kick the mullahs while they are down. Iran extended the United States the same courtesy in Iraq. Iranian operatives trained, fought with, and provided advanced improvised explosive devices to Iraqi insurgents in order to kill American soldiers.

The United States should publically encourage the unrest in Iran, while avoiding the endorsement of any specific opposition candidate. It should also be piping Voice of America broadcasts in Iran, covertly facilitating internet access for key dissidents, and providing material and weapons support to certain dissident groups who want to do something more than protest (making sure to avoid those with ties to terrorism).

1 Response to Iran: Another Domino Teeters; America Should Shove It Over the Edge