Decision Points is President George W. Bush’s personal account of the most consequential decisions that impacted his controversial presidency. Whether one likes President Bush or detests him, this book is a must read for any serious student of history.

One thing that very much irritated me about Decision Points was its patrician tone. Despite the former President’s numerous attempts to provide examples otherwise, the tone and manner of the book consistently betrayed his patrician background and upbringing. Particularly annoying were his incessant references to the forty-first President of the United States as “Dad.” The book might as well have been written by Thurston B. Howell, III of Gilligan’s Island fame with his Northeastern establishment patrician tone and accent. The former President’s attempts to portray himself as an everyman utterly failed. For this unpardonable offense, I rate the book’s style a 2.5 out of ten.

A lot happened during the eight-year tenure of President George W. Bush. It would therefore be impossible to cover every event and decision in enough detail to provide a comprehensive account of his presidency in just 477 pages. To solve this problem, the President organizes the book around only the most consequential (and controversial) events and decisions of his presidency, including 9/11, Katrina, Iraq, and the financial crisis. By focusing on only the most significant events, the President is able to provide more detail around them in a way that helps make the book much more interesting and pithy. Because of this organization, the book receives a rating of 8.5 out ten for structure.

Given the President’s tulmultuous eight years, there was plenty of fodder for interesting stories. The President appeared to provide a fair and honest assessment of both his successes and failures (in my opinion). He also did not hesitate to name names when criticism was deserved.

In his section on Katrina, the former President provided a fair assessment of why the federal government was unable to react to the crisis as quickly as it should have. I recall at the time never hearing any reporters mention the Posse Comitatus Act of 1878 as a reason why the U.S. military could not intervene, and my being very frustrated that the mainstream media blamed the mess almost exclusively on the federal government. As Bush clearly lays out in his book, he legally could not send active duty troops to Louisiana without the governor’s authorization because of the Posse Comitatus Act of 1878.

The book also exposes the sheer incompetence of Governor Blanco during the crisis. Despite the President’s repeated attempts to encourage her to accept federal help, Blanco told the President she needed twenty-four hours to think it over. While President Bush could have invoked the Insurrection Act to overrule the governor, he did not do so for superficial political reasons. He wrote “If I invoked the Insurrection Act against her wishes, the world would see a male Republican president usurping the authority of a female Democratic governor by declaring an insurrection in a  largely African American city.”

While Bush later admitted that he should have sent federal troops to New Orleans without law enforcement powers sooner, he never considered invoking the Insurrection Act. I think his failure to do so was a mistake. In my view, the President should have overruled the objections of this incompetent governor and invoked the Insurrection Act, political considerations be damned.

In another interesting story, the President relates a tale about how a lone hen turkey standing in the middle of a road in Crawford, Texas convinced Crown Prince Abdullah not to rupture his country’s relationship with the United States. The fact that this absurd “sign from Allah” prevented a rupture in America’s relationship with one of the world’s largest oil suppliers is yet another reason why the United States desparately needs to reduce its reliance on foreign oil.

The President provides many other interesting anecdotes surrounding his key decisions. This  makes the book a worthwhile read. For this reason, I rate the book a 7.50 out of ten on substance.

The book makes some references to Bush’s deep Christian faith. This unnecessary religiosity distracts from Bush’s political analysis and it failed to affect me on an emotional level. Therefore, I rate the book’s sentiment a 2.50 out of ten.

Whether you like him or not, the decisions President Bush made during his eight-year Presidency will have far-reaching implications for twentieth-century history. For instance, in hindsight, will historians see Bush’s presidency as the high water mark of American power or will they consider it the first shock that would ultimately result in the democratization of the Middle East? Will they see the TARP program as a failure or as having saved the integrity of the financial system? For any future historian, the former President’s account of his decisions will be an essential primary source for the period. Therefore, the book rates 9.00 out of ten in terms of significance. 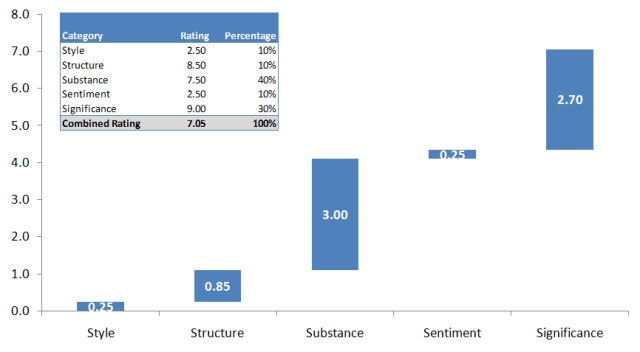 The book’s overall rating is 7.05 out of ten, after assigning the appropriate weights to each item. The book is an interesting read if you are willing to suffer through the former President’s attempts to present himself as an everyman.