In the first installment of this series, we introduced two widget producers called Egalitarius and Meritocratus.

Egalitarius’ management encourages its workers to unionize, because it wants to ensure that the company treats them fairly.

Its first order of business is to demand a 20% pay increase.

Since labor constitutes 50% of a widget’s cost, Egalitarius’ cost of $0.70 per widget increases by 7 cents.

When Egalitarius’ management revises its 2012 financial projections, it is shocked to see an 80% decline in its projected profitability.

The market does not like these developments either, so the stock’s multiple drops from 10.0x earnings to 9.0x on news of Egalitarius’ unionization. The company’s market capitalization drops like a stone from $3.15 billion to $567 million.

Below is a spreadsheet showing a comparison of both companies after unionization of Egalitarius’ workforce. 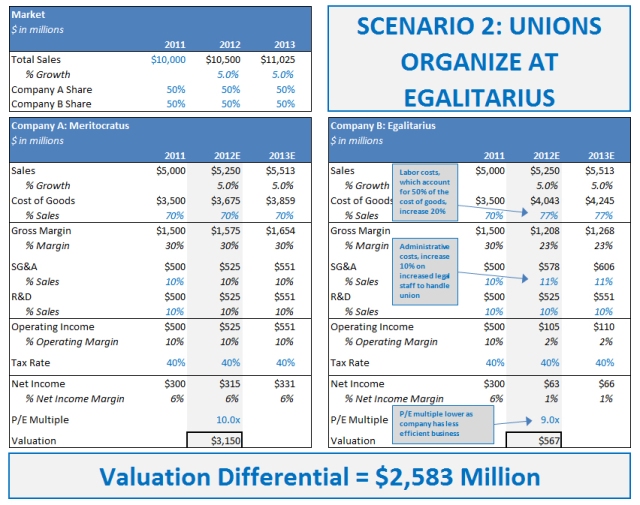 Egalitarius’ management knows it must take emergency action before its shareholders oust the team or the company becomes an acquisition target.

In the next installment of this series, Egalitarius responds to the crisis.

4 Responses to Capitalism, Unions, and Offshoring (Part II): Workers of the World, Unite!