In the last four installments of this series, the Widget Worker’s Union (WWU) brought Egalitarius to its knees with a strike that ultimately forced the company to declare bankruptcy. Before the WWU strike, Egalitarius’ management instituted several aggressive cost-cutting measures to offset the cost of more expensive unionized labor. This scenario starts at this point, long before the strike begins.

This time the focus is on Meritocratus.

Meritocratus’ management was looking for ways to improve the company’s profitability. As such, the company discovered it could produce the same quality product overseas at one-third the labor cost. Furthermore, one particular country, Freedonia, offered American companies a tax holiday if they built production facilities there. Meritocraticus’ management calculated that by relocating production jobs to Freedonia, it could lower the company’s effective tax rate from 40% to 15%.

When Meritocratus’ management ran the numbers, it learned that these two drivers — labor cost improvement and tax rate reduction — could quintuple the company’s profit projections for 2012.

The decision was a no-brainer.

Management announced the move the next day.

And the stock market loved it, rewarding the company with a premium P/E multiple of 12.0x versus the 10.0x earnings multiple at which the company traded the day before.

The layoffs and facility closures began shortly thereafter as the company left the men and women behind who built the company from nothing.

Below is a spreadsheet showing a comparison of both companies after unionization of Egalitarius’ workforce, Egalitarius’ aggressive cost-cutting measures, and the offshoring of Meritocratus’ workforce. 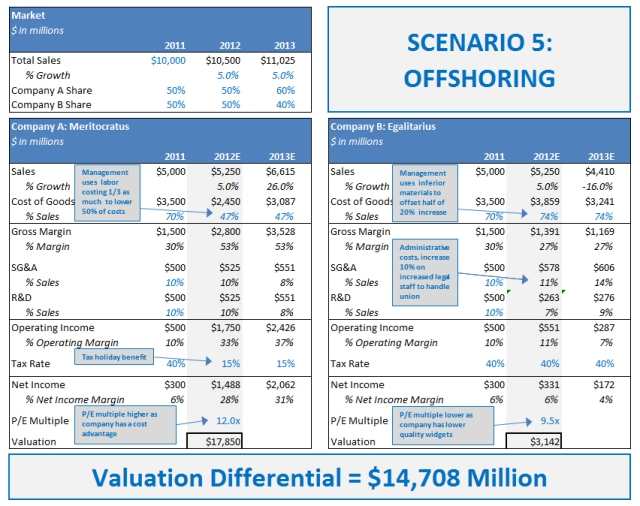 In the next installment of this series, we examine how both companies weather a major recession.