In Part I of this series, I argued that a fundamental reason our government is broken is the political selection process favoring ideological warriors over pragmatic problem solvers. I introduced my “Funnel of Futility” theory: as ideology becomes increasingly important in one’s decision-making process, the more futile working with an ideological opposite becomes. In contrast, as more data-intensive decision-makers interact, the partisan gap narrows, and government becomes more useful and efficient.

Today, I will introduce the second official guiding principle of Reflections of a Rational Republican — small, but not minimal, government is best.

Small, but Not Minimal, Government Is Best

Since 1901, federal government expenditures have grown exponentially. They have ballooned in recent years so much that one can no longer see pre-1940s values on the chart below. Furthermore, the chart also color-codes each year by the political party occupying the White House. It soon becomes abundantly clear that government has expanded regardless of the party controlling the executive branch.

Of course, American real GDP growth and inflation accounted for most of this effect, so it is more instructive to couch the expansion of government in more relative terms. The chart below illustrates federal government expenditures as a share of U.S. GDP.

From 1930 to 2011, federal government expenditures have averaged about 19% of U.S. GDP. However, if one excludes the last thirty years, that number declines to about 18%, on average. Additionally and despite popular opinion, there is little difference in this percentage between Republican and Democratic administrations. Under Republican presidents, federal government expenditures averaged about 19.0% of GDP, while under Democratic ones it averaged 19.1%. In terms of 2010 GDP, electing a Republican president might only save the country about $11.4 billion, which is roughly equivalent to cutting ethanol subsidies for about two years.

If one uses 19% (or 18%) of GDP as the “appropriate” size of government, it quickly becomes clear that the nation is currently on an unsustainable path. Massive deficit spending does indeed seem to work well for stimulating an economy – particularly military spending. Thus, it is no surprise that the top three years of federal government expenditures as a share of GDP were 1943, 1944, and 1945 when the nation was fully mobilized for World War II. However, the good thing about military spending is that when a crisis ends, there is little reason to continue to support a massive military-industrial complex indefinitely, and it gradually scales down over time. In fact, the DOD’s share of GDP has been in decline since the end of the Cold War and looks to decline even further over the next decade.

The problem with most other government spending, particularly entitlement spending, is that once government establishes an entitlement, it rarely goes away. The reason is due to a psychological human reaction known as the endowment effect. Once government endows people with an entitlement, people tend to perceive its loss as greater than acquiring another benefit of ostensibly equal value. Our representative system also tends to amplify this effect. Politicians who dare to speak of Social Security reform, for instance, tend not to get re-elected.

As a consequence, the federal government is projected to be 25.3% of GDP in 2011, one-third higher than the long-run historical average. 2011 and 2009 are the fourth and fifth highest years of federal spending as a share of U.S. GDP since 1930. Only this time, a World War is not driving these expenditures – rising entitlements for an aging population are.

Associated with rising federal government expenditures is the growing number of full-time federal executive branch employees. The absolute number of such employees reached its high in George Bush senior’s administration, but fell off rapidly during the Clinton years, due primarily to defense budget cuts following the Cold War. Under Clinton, 88% of the civilian executive branch jobs cut from 1993 to 2000 were from the Defense Department.

Net civilian executive branch jobs increased steadily under George W. Bush’s administration, driven primarily by the creation of the Department of Homeland Security. During that period, the Department accounted for 149% of these net new civilian positions.

During President Obama’s first three years in office, the president added nearly four times as many net federal executive branch jobs as President Bush did during his entire eight-year presidency. He also expanded the Defense Department by nearly eight times that of his predecessor. Additionally, he added roughly 15,000 net positions to HHS, Education and the Social Security Administration vs. approximately 3,000 net positions cut during the Bush presidency. The bottom line is that government is now expanding at an accelerating rate. 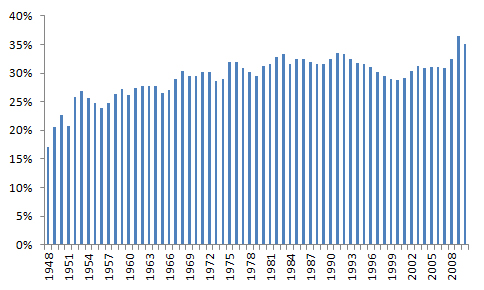 The continued expansion of government results in massive waste, fraud, and abuse. According to a 2010 GAO report, duplicative government programs waste billions of taxpayer dollars. For instance, there are fifty-six separate programs dealing with financial literacy; twenty programs dealing with homelessness, costing $2.9 billion in 2009; eighty-two teacher quality programs; eighteen domestic food assistance initiatives, costing $62.5 billion; fifteen agencies administering 30 food-related laws; and 2,100 government agency data centers, which if consolidated could save up to $200 billion over the next decade. The bottom line is that the government continues to spend like a drunken sailor. These programs should be low-hanging fruit. Why government hasn’t yet addressed them is a clear sign of its failure.

Starve the Beast, But Do Not Hack Off Its Limbs

This site does not advocate stripping government away completely. Private enterprise has little incentive to produce public goods like roads, clean air, and a national defense. As such, government has a useful role to play in these areas. Government also has a role in upholding the law and enforcing contracts. That said, this site believes government ought not use taxpayer money to provide private goods to people when the private sector can nearly always do a better job.

The bottom line is that Reflections of a Rational Republican believes that government has overshot its equilibrium position in the modern U.S. economy, and Americans ought to make every effort to rein it in. That said, this site does not advocate a wide-ranging dismantling of every government department. To be sure, waste exists; however, the scalpel is always preferable to the hack saw.