Since starting this blog almost ten months ago, I intended to post this site’s guiding principles. Yet ten months into this experiment, I still haven’t done so. So without further ado, here is the first of seven principles that embody the philosophies underlying Reflections of a Rational Republican.

One of the fundamental reasons our government is broken is that the political selection process favors ideological warriors over pragmatic problem solvers. For instance, each party’s primary process rewards candidates who toe the party line, and punishes those who sometimes favor practical solutions over partisan mandates.

Another major problem with our political system is that it is dominated by lawyers. According to Fox News, 203 of the 541 members of Congress are attorneys, and 218 have JD degrees. In other words, 40% of Congress has legal training, and 39% have practiced law at some point in their careers versus 0.3% in the overall U.S. population.

The problem with legal training is that it is focused on advocacy. Lawyers are imbued with a sense that they must provide their clients with the strongest possible defense. As such, they focus ruthlessly on the strengths of their clients’ cases, while downplaying the weaknesses. The American legal system is by nature highly adversarial. As a consequence, lawyers have a tendency to focus on winning their arguments rather than problem-solving.

In contrast, most first-time members of China’s political leadership were not lawyers, but engineers and administrators. In China’s 17th Politburo, 76% of members had experience as provincial leaders. Until several years ago, all nine members of the Politburo’s Standing Committee were engineers by training.

The contrast between the two countries today could not be clearer. The Chinese government has focused on problem-solving. After all, the pressure to create over 24 million jobs a year to stave off social instability is a very real motivator. The country’s economy continues to grow at well above 8% a year, and, as of October 29, 2011,  it has accumulated massive foreign exchange reserves of $3.2 trillion. In contrast, the United States continues to be mired in partisan political bickering that nearly triggered a default on its federal debt in August 2011. It is then no surprise that America’s economic growth is expected to remain below 2% for the foreseeable future.

The only way to reconcile political differences is to find common ground. The easiest way to do that is to use data to drive decision-making. I believe that people generally fall into four buckets. They are either liberal or conservative, and they favor either ideology or data in policy developement. I believe every sound government should have some ideologically driven leaders from both political parties to inspire us. That said, I believe the government that governs best is one populated predominantly by data-driven decision-makers. For these individuals, ideology is important, but data is supreme. The problem today is that America’s government is dominated by data-fudging ideologues who care more for party than for problem-solving. 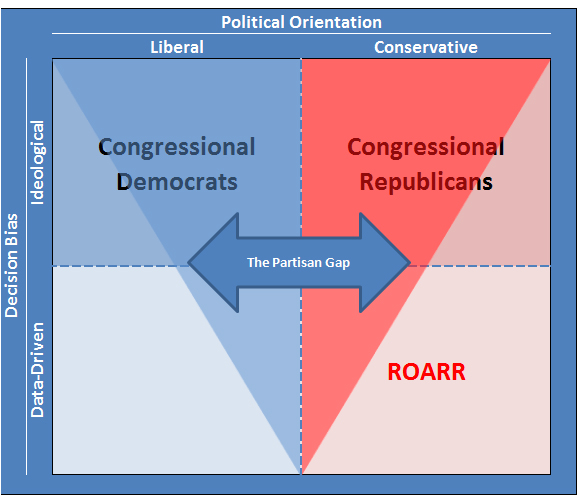 The figure above provides a useful framework to illustrate this problem, and is the primary reason I created this site. I call the funnel in the chart, the “Funnel of Futility.” The more ideological a decision-maker is, the wider the gap between him and his ideologically equivalent counterpart. As ideology becomes increasingly important in one’s decision-making process, the more futile working with an ideological opposite becomes. In contrast, as more data-intensive decision-makers interact, the partisan gap narrows, and government becomes more useful and efficient.

As such, the purpose of this site is to confront the facts, create a dialogue centered around data, and engage in problem-solving rather than political bickering.