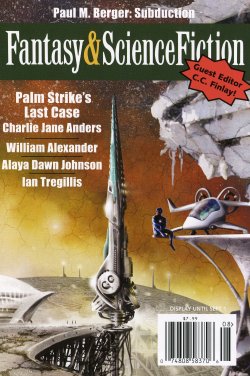 If you’re not one of my regular readers, you’re probably wondering why The Magazine of Fantasy & Science Fiction routed you to a website called “Reflections of a Rational Republican” for a review of its recent July/August 2014 issue.

Republicans like fantasy and science fiction, too. And I promise to keep politics out of it.

For this issue, guest editor C.C. Finlay selected thirteen solid stories out of a field of 751 submissions. It is also the first issue in the history of The Magazine of Fantasy & Science Fiction where prospective writers could submit stories electronically. Moreover, none of the thirteen authors in the issue has ever appeared in the magazine, which made for a refreshing change of pace. Overall, I think C.C. Finlay has an excellent eye for great stories and a rare talent for discovering new authors. I thoroughly enjoyed this issue and look forward to his next.

The issue does not have the usual editorial, which, it turns out, Finlay pulled out to make room for a thirteenth story. I think he deserves a ton of credit for being a real mensch in this regard. That said, his editorial is still definitely worth a read. Those interested can find it here.

“Palm Strike’s Last Case” by Charlie Jane Anders
The issue’s first story is a fascinating and unique genre mash-up, which I’d describe as The Punisher meets colonization. It follows an over-the-hill superhero, Palm Strike, bent on avenging his son’s death. Over the course of  Palm Strike’s struggle, a lottery selects him for a colonization mission. Surviving the sabotage of his cryo-unit en route, he must both find his son’s killer and save the colony from starvation.

One thing that makes it a worthwhile story is that readers can walk away from it having learnt something interesting. This story has some intriguing stranger-than-fiction historical analogies that enhance the story’s telling. Alluding to Mao’s Four Pests Campaign during the Great Leap Forward, Palm Strike’s sidekick Josiah explains how Palm Strike’s relentless pursuit of drug pushers only strengthened his nemesis Dark Shard, the villain who spurred Palm Strike to become a vigilante:

The transition from a supercharged vigilante on Earth to a geo-engineer saving a colony light years away, while a bit jarring, ultimately worked well for the story. Also, I don’t know if was intentional, but I found it ironic that the character who had single-handedly screwed up the colony’s agricultural system shared his name with the large multinational agribusiness, Cargill. Either way, the story is a thoughtful and creative one.

“Subduction” by Paul M. Berger
“Subduction” is a modern fantasy that begins with a mystery of memory loss. Berger ultimately weaves the story into a riveting tale of earthquakes, dragons and sorcery. The only part where I thought the story lacked credibility was when the protagonist, Oliver, too easily forgave a woman after she had almost done something unthinkable to him.

The story’s climax was well-executed and skillfully tied up many of the plot’s loose threads. Overall, this story was entertaining and well worth the read.

“Seven Things Cadet Blanchard Learned from the Trade Summit Incident by Annalee Flower Home”
This was an entertaining and humorous story told in the vein of a disciplinary action plan. It also had one of the most amusing opening lines of the issue: “I knew I was in trouble when the air vents in the ship’s gymnasium started farting.”

What I enjoyed most about this story is that it perfectly embodied what it’s like to operate in a system that has a very rigid rules regime and how sarcasm helps people grin and bear it with a smile.

“The Traveling Salesman Problem” by David Erik Nelson
What started out as a mystery about an enigmatic dentist who was winning long distance running competitions morphed into the most technical story of the issue. It centered on the traveling salesman problem, a well-known and intractable problem that is the cornerstone of modern encryption technology. When a young boy solves the problem, the protagonist quickly grasps the cataclysmic implications for modern civilization and must take drastic action.

I really enjoyed this story because it made me think. My only major critique is that if you’re going to have a character dazzle someone with his rapid and accurate calculation skills, you’ve got to get the math right. It turns out that the calculation for the total number of route combinations through 19 cities in the story (i.e., (n-1)! where n=19) is off by two trillion. My guess is that this minor error was just a typo. Math error aside, this story was a solid one.

“End of the World Community College” by Sandra MacDonald
This tongue-in-cheek satire was written in the guise of a post-apocalyptic community college’s course guide. The author is clearly familiar with the issues facing higher education in the United States today. That said, for me, this felt more like a checklist than a story.

“The Girls Who Go Below” by Cat Hellisen
A strange man stands between two sisters in South Africa, tempting or enchanting (it’s never clear) one to tear the other apart. This story was one of the more beautifully written of the issue, and the haunting reveal at the end was well worth the slow build up. Dark and chilling, this tale was captivating. I highly recommend it.

“The Day of the Nuptial Flight” by Sarina Dorie
What begins as a story of erectile dysfunction meets classic behavioral imprinting morphs into a beautiful story about interspecies communication, and briefly, collaboration. While things ultimately take a turn for the worse, the story ends with a vision of hope. Dorie writes convincingly from the perspective of an apian alien drone who views human society through the lens of the hive. As a result, the drone makes a number of embarrassing errors, but gradually learns to communicate with humans. This well-written story successfully portrays how an alien species might make assumptions about human behavior based on an alien-centric viewpoint, much as humans might do the same in trying to understand the behavioral patterns of an alien species. Thoughtful and imaginative, this tale was a very satisfying one.

“The Aerophone” by Dinesh Rao
This story about a man who uses ancient instruments to unwittingly establish contact with either aliens or the gods of the Aztecs was creepy and captivating. It also very convincingly showed how some will use people as objects to achieve their own selfish ends. While the story had me right up until the end, the resolution was understated and disappointing. Overall, I found the story mesmerizing, creative, and highly entertaining. I highly recommend it so long as you’re prepared for its underwhelming conclusion.

“Testimony of Samuel Frobisher Regarding Events Upon His Majesty’s Ship Confidence, 14-22 June 1818, with Diagrams” by Ian Tregillis
When a scientist dredges something from the ocean’s dark depths, one half-deaf sailor stands between the crew’s survival and oblivion. This is the best story of the lot. It was very Lovecraftian in both its material and in the manner of its telling. Think She Creature meets “Cthulhu.” Tregillis is also a master in creating a haunting atmosphere that makes it really feel like being on a ship in 1818. He also perfectly captures the voice of an impressed sailor.

If you can read only one story in this issue, this is the one.

“Five Tales of the Aqueduct” by Spencer Ellsworth
This story contains a string of five vignettes about the California Aqueduct in Lancaster, California told in a nonlinear style. I would classify it as literary science fiction. Not my cup of tea, but readers who enjoy this kind of story should definitely check it out.

“Belly” by Haddayr Copley-Woods
This twisted tale about a young girl suffering inside the belly of a witch kept me turning pages until the end. It’s definitely not for the faint of heart, nor should one read it at mealtime. But it’s the best witch story I’ve read in a long time. And it takes the theme of nature versus nurture to a whole new, psychotic level. I highly recommend it.

“The Only Known Law” by William Alexander
“The Only Known Law” is a classic first contact story with a twist. Alexander kept me guessing until the very end when the alien revealed its terrifying warning. The story was well-drawn and had deep characterization that made me sympathize with the characters’  plights. Overall, I found this story to be very entertaining.

“A Guide to the Fruits of Hawai’i” by Alaya Dawn Johnson
Three words: vampire concentration camps. You’ll either love it or hate it. It’s a very well written story with strong, compelling characters.