While the last three parts of this series focused on issues ranging from the immediate impact on Egypt to the far reaching potential for unrest to spread to key American energy suppliers, it has ignored the crisis’ implications for Israel.

The bottom line for Israel is that its most stable border suddenly became a lot less so.

If President Carter can claim credit for anything, it was cementing a peace between Egypt and Israel that has lasted over three decades. The Camp David Accords virtually eliminated the need for the Israeli’s to defend a third front in any future war with its Arab neighbors.

For his efforts, Egyptian President Anwar Sadat got the Nobel Peace Prize and a bullet from Islamic fundamentalists.

Today, that stability is at risk should more radical forces like the Muslim Brotherhood seize a greater share of power in Egypt. It seems the group is already starting to make its move. The Muslim Brotherhood announced Saturday that it would begin talks with Egypt’s Vice President Omar Suleiman “on the public’s right to protest safely and the possible exit of President Hosni Mubarak.“

The Israelis are likely monitoring the situation with great interest as it will have a real impact on future troop dispositions and deployments on Israel’s southwestern border.

Yesterday, a gas pipeline exploded in the northern Sinai. While the press has identified no responsible party, the Egyptian military has reported that the detonation was caused by an explosive device, no doubt placed by an enemy of the Egyptian government. 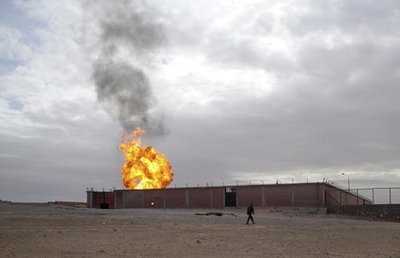 While the Cat’s Away, the Mice Will Play: Iranian Proxy Wars

The unrest in the Sunni world could not have come at a worse time for Israel. Events in Egypt have become a distraction from the more dangerous threats lurking on Israel’s northern front and in the Gaza Strip.

Still smarting after the Stuxnet computer virus destroyed Iranian nuclear centrifuges, and the mysterious bombings of two Iranian nuclear scientists, the Iranians are likely looking for ways to strike back at Israel.

Hezbollah’s recent resurgence and consolidation of power in Lebanon culminated in Prime Minister Saad Hariri’s turning power over in January to the same butchers who murdered his father in 2005. Hezbollah’s political entrenchment in Lebanon provides the Iranians with a free hand and a well-trained and ruthless proxy army to strike back at the Israelis.

On January 1st, I predicted a border war between Hezbollah and Israel in 2011. The unwelcome distraction of Egyptian unrest on Israel’s southern left flank will likely preoccupy some portion of the Israeli military’s attention, allowing Hezbollah more freedom of movement to strike in the north.

A military confrontation is now more likely than it was at the beginning of 2011.

Since the 2006 war with Israel, Hezbollah has been steadily building up its missile arsenal. Military officials have indicated that Hezbollah now possess some 50,000 rockets, 10 Scud-D missiles, and 40 to 50 Fateh-110 missiles that can range most targets in Israel, including Tel Aviv. This new arsenal dwarfs the some 4,000 missiles Hezbollah fired at Israel in 2006.

Hamas may also judge that now is the best time to strike while Israel’s attention is focused on Egypt, with Iranian helpers eager to provide weapons, training, and advice.

America should brace itself for another cycle of Middle Eastern instability.

What is America to do? Tune in for Part V of this series tomorrow to find out.