Should I Buy a Hybrid or an Electric Vehicle? (Part II): Marginal Price of Electricity

Before I post my results later this week, it is important to first outline what key variables will likely drive the decision.

The four most important decision drivers are the marginal cost of electricity, the price per gallon of gasoline in California, each automobiles’ sticker price, and how many miles I intend to drive the car annually.

This post will cover the historical costs of electricity and how one should think about estimating its marginal price. Yestersday’s post, Should I Buy a Hybrid or an Electric Vehicle? (Part I), included the price of each automobile. Tomorrow, I will discuss the considerations around California gasoline prices, and the car’s estimated annual mileage.

Determining one’s marginal cost of electricity is a critical step in determining the cost of charging an electric vehicle.

Not all electric utilities charge customers the same way. Most states and localities have complicated rate structures designed to shift the cost of providing electricity to those who can afford it, so that they can provide electricity to the poor at subsidized rates. Additionally, some structures are tiered in such as way that the more electricity a household uses, the more it costs at each tier.

The Holy Grail for electric utilities is to implement time of use (TOU) rating structures. TOU allows utilities to charge customers based on the time of day and year that customers use electricity. That way, the electric utility can charge customers more money during periods of peak demand, when the cost to supply that electricity is highest. Under such an arrangement, a utility would charge more for electricity used on a hot summer day, when people are using their air conditioners, than it would charge at 4 a.m., when most people are asleep.

PG&E supplies electricity to my area via the following seasonal, five-tier rating structure for an average 30-day month.

This rate structure only accounts for a household’s electricity consumption. PG&E also charges a separate rate for natural gas heating. However, the electricity component of one’s monthly utility bill is the only relevant factor required to estimate the incremental cost of charging an electric vehicle.

The state’s public utility commission sets these rates for different regions. For my region, the baseline rate is 12.1 kWh per day in the summer and 12.6 kWh per day in the winter. For an average 30-day month, this translates into a monthly baseline of 363 kwh and 378 kwh, respectively.

Because the utility company will charge the incremental electricity consumption from an electric vehicle at the customer’s highest tier rate, determining that customer’s highest tier is more relevant than his average rate. If, for instance, one is already consuming enough electricity each month to put him in Tier 4, the incremental cost of charging an electric vehicle will be $0.40 per kWh rather than $0.27 per kWh, the simple average of the five, rate tiers.

Below is a chart of my monthly electricity consumption (in kWh), the electric component of my utility bill’s total cost, and the total bill, which includes the cost of natural gas. The chart includes all my utility bills since I moved into my new home. 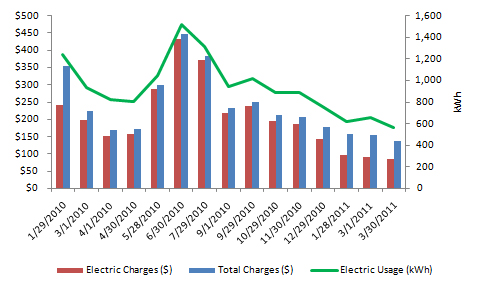 The chart shows a consumption pattern consistent with higher electricity use during the hot summer months and higher natural gas use during the cold winter ones.

The chart also makes it very clear that energy is extremely expensive in California with my personal utility bill peaking at $446 during this period.

To determine the marginal utility rate of adding an electric vehicle, I examined the one-year period from February 2010 to February 2011. I wanted to determine my household’s highest marginal rate and how many kWh’s I consumed at this rate in both the summer and winter months.

Over this one-year period, my household consumed 6,725 kWh and 4,837 kWh during the summer and winter months, respectively. 2,321 kWh of this energy consumption were in either Tier 4 or 5 during the summer, and 251 kWh were in Tier 4 during the winter. Since Tier 4 and 5 both have rates of $0.40 per kWh, the incremental cost for me to charge an electric vehicle would be $0.40 per kWh.

Tomorrow, I will examine other critical variables, including the price of gasoline and the number of miles I intend to use in my calculations.

Click here for the next installment of this series.

1 Response to Should I Buy a Hybrid or an Electric Vehicle? (Part II): Marginal Price of Electricity