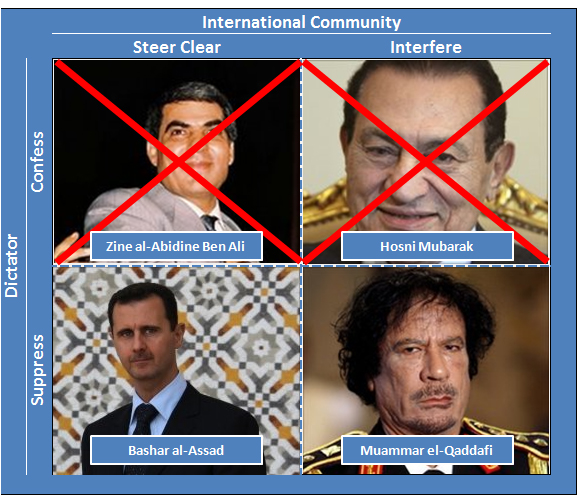 Towards a Dominant Strategy

In “Saudis Shrug Off Day of Rage: Three Strategies to Suppress a Revolt Before It Starts“, I argued that there are two archetypal models for a dictator to deal with popular revolts in the Middle East: crush them or concede to protestors by leaving office. In the second model, sometimes the ruling class “encourages” a dictator to leave.

I further made the following points:

“On the one hand, using force to suppress revolts appears to be the more effective of the two for maintaining power in the Middle East. Witness Saddam Hussein’s actions against the Kurds, his actions against the Shia after the first Gulf War, Hafez al Assad’s actions in Hama, and Libya’s actions against its rebels, which seem to allow that government to gain more ground with each passing day. Again, I am looking at things from a political rather than a moral standpoint and do not condone these actions.”

Five months later, the data seems to support these views. When I had written the article, both Tunisia’s Ben Ali and Egypt’s Mubarak, had already stepped down from office.

Ben Ali fled Tunisia amidst intense rioting and pressure from his own people, and with little pressure from the international community.

Mubarak held on for as long as he could until he stepped down on February 11, 2011 amidst internal pressure from his military, and external pressure from the United States, albeit with sharp divisions without President Obama’s foreign policy team. In April 2011, the Egyptian military detained him and his two sons for questioning.

In early August 2011, a visibly ailing Mubarak faced charges earlier this month of “corruption and complicity in the killing of protestors.”

Therefore, in every instance throughout the Arab Spring in which a dictator stepped down either through internal pressure (Tunisia) or both internal and external pressure (Egypt), that dictator became a target of public retribution. While there is nothing wrong with this fact — these dictators were brutal toward their own people — it goes to show that “confession” is a losing strategy for a Middle Eastern dictator focused on political survival.

In stark contrast, those dictators who took the latter approach and brutally suppressed (and continue to suppress) internal revolts are still standing.

Syrian President Bashar al-Assad decided to apply the lessons he learning from his father’s brutal suppression of Hama nearly three decades ago in dealing with his own internal revolts. According to The Economist, the Syrian military has killed some 1,500 Syrians since March in an aggressive campaign throughout the country.

By using these tactics, President Assad may have earned the condemnation of the international community, yet he still remains in power. Furthermore, no outside power appears to be actively working against him.

Libyan dictator Colonel Muammar el-Qaddafi also resorted to crushing his internal revolt. As a result, the international community under the guise of NATO intervened. While the Libyan rebels have steadily gained ground with the aid of NATO air forces, Qaddafi still remains in power.

That said, the rebels appear to be their own worst enemies. It is rumored that the Islamic militia contingent assassinated their defense minister, Abdel Fatah Younis. Younis was capably coordinating a campaigns on three fronts: the western mountains, Brega (the only place where the rebel assault is stalled), and Misrata. Therefore, this self-inflicted wound will not only make it more difficult for the rebels to coordinate the three military campaigns, but also it will sow divisions amongst the various Libyan rebel factions. Ultimately, this is good news for Qaddafi.

Game Theory is a fascinating field within economics that reached prominence during the Cold War. It involves maximizing a nation’s or an individual’s set of choices based on the choices of others.

Nobel Laureate in Economics Thomas Schelling provided his vision of game theory as a framework for the social sciences in his book The Strategy of Conflict in the late 1950s. He showed that “a party can strengthen its position by overtly worsening its own options, that the capability to retaliate can be more useful than the ability to resist an attack, and that uncertain retaliation is more credible and more efficient than certain retaliation.”

At the beginning of this article, I provided a decision matrix for the run-of-the-mill Middle Eastern dictator in the post-Iraq invasion age (an important distinction because the threat of another American Middle Eastern land invasion is much diminished after the Iraq War).

Based on the four examples of Tunisia, Egypt, Syria and Libya, it appears that regardless of what actions the international community takes, a Middle Eastern dictator’s dominant strategy is to suppress his internal revolt.

Unfortunately, for the international community, there does not appear to be any dominant strategy whatsoever.

The point is not that suppressing a revolt is the moral thing to do. It obviously is not. Unfortunately, in the Middle East, it is the most rational strategy.