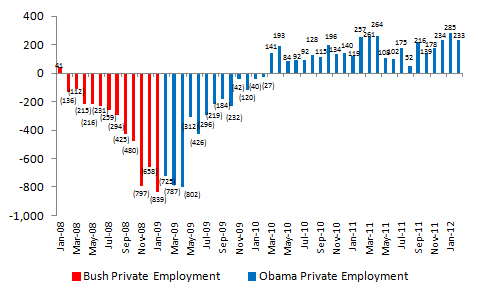 In February, the private sector added a robust 233,000 jobs in the twenty-fourth consecutive month of private sector job growth. This development is very positive news. The country also had a net employment gain of 227,000 total jobs (private and public). More importantly, 227,000 exceeds the 125,000 jobs needed each month just to keep pace with the growth of the working-age population, which is also very encouraging news.

More importantly, February 2012 is the second month in which the overall number of jobs lost during the Obama administration is lower than the number lost during the Bush administration. That said, the unemployment rate is still about a percentage point worse today than it was during President Bush’s last full month in office. 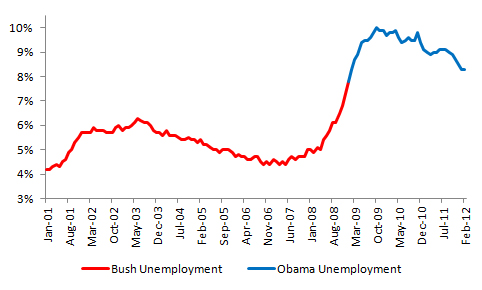 That said, the unemployment rate only accounts for the percentage of the unemployed who are actively seeking employment. It does not include people who have given up on finding jobs. The month ended with more people employed at the end of February than were employed at the end of January, but the civilian labor force grew faster than the number of new employees entering the work force. Therefore, the main reason unemployment remained constant is that the numerator (the number of employed Americans) increased less than the denominator (the civilian labor force) in the unemployment equation increased.

The civilian labor force ended February at 154.9 million vs. January’s 154.4 million. 142.1 million people had jobs in February, which was an increase of about 428,000 people from January versus about 476,000 people who entered the labor force. 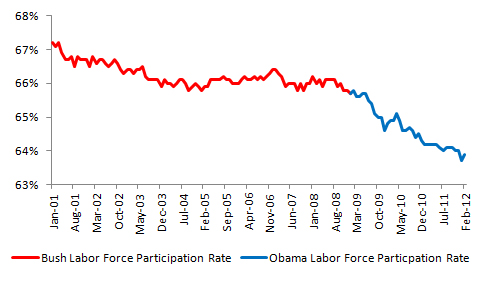 The employment statistics during President Bush’s period in office continue to look better than those under President Obama’s to date if one puts more emphasis on the overall unemployment rate. However, President Obama’s employment statistics seem better if one looks at total private sector employment. Over President Bush’s tenure, the private sector lost a net 646,000 jobs, assuming that he gets credit for all jobs lost in January 2009 and none for those lost in January 2001. I changed my methodology in response to a left-leaning blogger‘s fair point “that CES estimates represent information reported by survey respondents for their pay periods that include the 12th of the month.” Hence, any subsequent numbers for jobs created near the end of January would likely appear in the February numbers. 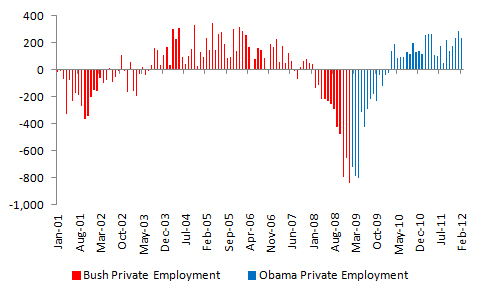 While the President is almost breakeven on private sector job creation, the unemployment rate continues to remain high. It will likely continue to remain so as more people enter the labor force as the economy improves, even if the private sector continues to add jobs at similar rates. The country still has a long way to go to restoring full employment and the President is running out of time. According to The New York Times, no sitting President since Franklin Roosevelt has won re-election when unemployment was over 7.2% on election day.