Writers of the Future Contest 1Q29 and 2Q29 Update 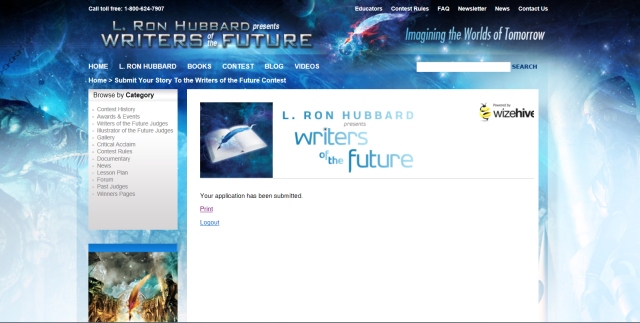 Back in December, I posted an article on the Writers of the Future Contest, and ultimately reported my Honorable Mention for 1Q29. Since then, the contest has gone on to report the overall contest winners for 1Q12 (aka 1Q29) and 2Q12 (aka 2Q29).

Sadly, I did not place in 2Q29. Upon reviewing my story, it made sense why. It seemed I had needed at least one more revision before the story was ready for prime time. At least there is always hope for future quarters. My 3Q12 submission is currently in the queue awaiting judgement, and my 4Q12 story is complete and ready for submission.

As promised, I have posted my overall progress in the Writers of the Future Content below. Hopefully, I win before I run out of space on this table.

©2012 Reflections of a Rational Republican

I have also updated a running tally of the number of winners since 1Q10 with the last two quarters’ results.

©2012 Reflections of a Rational Republican

Source: Writers of the Future Contest

At least this blog is keeping me honest.

At the risk of jinxing myself, where do you think I will place in 3Q29?